On our recent road trip from Silicon Valley to Palm Springs and back, we had numerous opportunities to observe behavior. Our itinerary was as follows.

What did our readers want to know? First, are people really paying attention to masking outside coastal California? Second, how is traffic during the ongoing so-called COVID emergency? Third, how’s business out there in the real world?

One curious exception was the Tejon Ranch outlets. About 85% of the customers wore masks, even while outside. My lovely wife noted that the stores were downscale. I leave it to you to draw conclusions.

We were at the Marriott for the Palm Springs Pinotfest. The organizers sited this event outdoors. Hence, no masks. Typical of the area, temperature was in the low 70s. 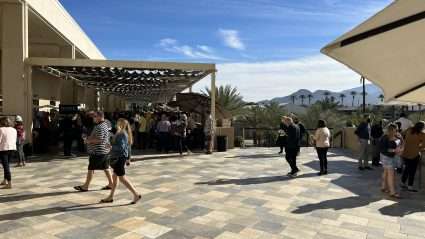 We took US-101 south to SR-152 east. It’s been many years since we drove that way. We were delighted with the new flyover where we expected the suicide left turn. Highway 152 is two-lane from Gilroy to the flyover. Traffic moves as fast as the slowest vehicle. After the flyover, the road becomes four lane, including one or two truck lanes. We moved right along to I-5. As we passed the San Luis Reservoir, we noticed that the water level was pretty low. The drought is not over.

I-5 southbound was in pretty good shape. A good chunk of the road has been recently paved. The right lane is a bit chewed up from trucks. And, with only two lanes in each direction, there were several slowdowns caused by big rigs passing slower big rigs. Technically the truck speed limit if 55 mph. About 10% of trucks were paying attention to that. For the rest, it was open season. But car traffic was no better. The speed limit is 70 mph. In effect, that was the minimum speed. If you drive 70 in the left lane, be prepared to move to the right lane frequently.

I-5 passes through the Tejon Pass. Beyond that point, road conditions went to hell. Bumps, uneven pavement, and two right lanes that were pretty much occupied exclusively by trucks.

We skirted Los Angeles to the north by taking I-210 and I-215 through Pasadena and the west valley. Traffic was heavy but moving. On our way back Sunday, the crazies were out. The worst was two small cars street racing. In traffic. Weaving in and out, probably at 100 mph. We slowed down a bit to let them get far ahead of us.

Finally we made it to I-10 and the desert. Flat, straight, pretty good road. It’s amazing how well the road to Palm Springs is maintained.

We left Sunday, January 9.  I-10 was busy but sane.  I-215, SR-210 and I-210 were nuts.
Drivers weaving in and out, road boulders in the left lane, many trucks and crazy intersections.  For reasons known only to CalTrans, the exit you want is always two lanes to the left and is 100 yards beyond an entrance (often two lanes).  Way too exciting.

I-5 was … I-5.  But I noticed a dotted red line on the CalTrans Quickmap.  The CHP reported a big rig on fire southbound.  This is what happens when even one lane of the freeway is closed.

We made it to the Gilroy Outlet Mall around 2 pm.  Shoes were on the list.  Scored a pair.  After that, the trip home was uneventful.

Moderately good.  The Tejon Ranch Outlets had quite a few customers Sunday, but was by no means crowded.  Parking lots were pretty full at the Gilroy Outlets on Monday.  The hotels were fairly busy on weekends.  Business is coming back but has a long way to go.

A successful trip, our first long road trip in almost two years.  Look for the first part of our review some time next week at California Wine Fan.

This site uses Akismet to reduce spam. Learn how your comment data is processed.