Various politicians nationwide have recently made claims to the effect that crime is falling. Here I want to focus on California specifically and give a partial answer to the question, “Which California crime statistics should you ignore?”

TV station KCRA (Sacramento) even went so far as to question the governor about this.

The governor was asked about the series of high-profile smash-and-grab robberies in California and the criticism that his state is “soft on crime.”

In response, he said, “Property crime has gone up in many, many states. Red states, not just blue states. Violent crime and property crime, for example, is higher in Texas than it is in California. I don’t see that on Fox News.”

Gov. Newsom is right about property crime being lower in California, but his statement about violent crime is misleading.

A review of the crime data from both states shows 2020 was the only year in the past five that California’s violent crime rate was slightly lower than Texas’.

Something else that could factor into the numbers is that California was also under a longer and stricter lockdown than Texas a year ago.

When you look at robberies specifically — which is really what the governor was first asked about — you see California’s robbery rate is consistently much higher than Texas’, which is at least 20 more robberies per 100,000 people.

The Data and a Mistake

I’ve cherry-picked some data that seems to reflect trends in the state. Don’t like my choices? Click here to download my Excel workbook. Data is from the California Open Justice initiative and is only available through 2020. 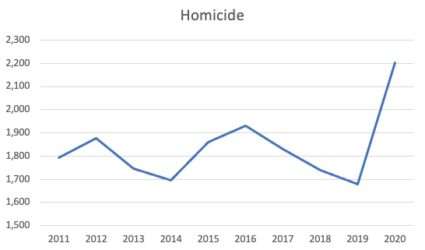 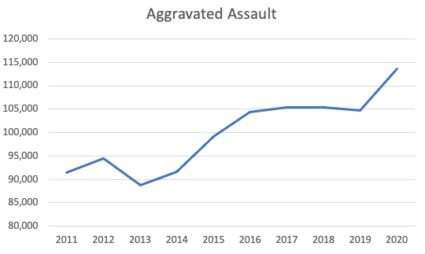 Over the last few years arson has accompanied many of the riots in the state. In 2020 there were 11,759 fires deliberately set in the state. That’s an incredible increase of 42.3% over 2019. 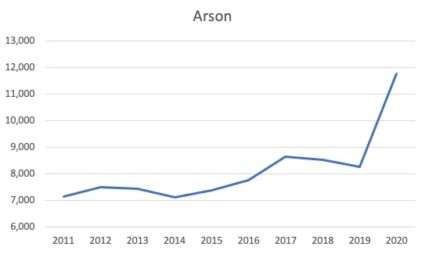 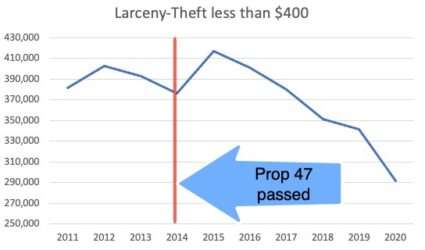 That’s the statistic you shouldn’t believe. The reason is on the graph. In 2014 California voters passed Proposition 47. Among other things, that law declared any theft of property valued at $950 or less was a misdemeanor. Today, people roam retail outlets with a large plastic garbage bag in one hand and a calculator in the other. Take an item off the shelf, drop it in the bag and add its price to your running total. When you hit about $940, leave the store. Today, clerks are told not to interfere. Retail businesses in much of the state have stopped reporting these crimes. Thus the statistics for larceny-theft are not accurate (to put it mildly).

By the way, KCRA’s conclusion was incomplete. Another reason California looks good compared to Texas is that California underreports Larceny-Theft crimes. A lot.

Large-scale smash-and-grab robberies make headlines. But the real damage is the ongoing, very frequent thefts of less than $950. Sadly, we don’t know how many of those crimes are being committed. Retail stores have simply stopped reporting them to law enforcement. The data on larceny-thefts is useless.