Among the 50 states, California ranks number one in the percentage of adults ages 25 and over who have not graduated from high school. California may be the dumbest state in the U.S.

These are the results of the 2018 American Community Survey.[1]  The ACS survey is mailed to addresses.  The survey includes residents, not just citizens.  We suspect undocumented immigrants are a major contributor to these figures.

Fully 16.24 percent of Californians do not have a high school diploma or equivalent. California trails Puerto Rico’s 22.50%. Small comfort that the state is second to a U.S. territory. Just behind California is Texas at 16.04 percent. Given the margin of error, it’s probably safe to declare the two tied for first. There is some separation between Texas and Mississippi at 14.60 percent. For the record, Table 1 shows the top eleven (especially constructed to include New York). 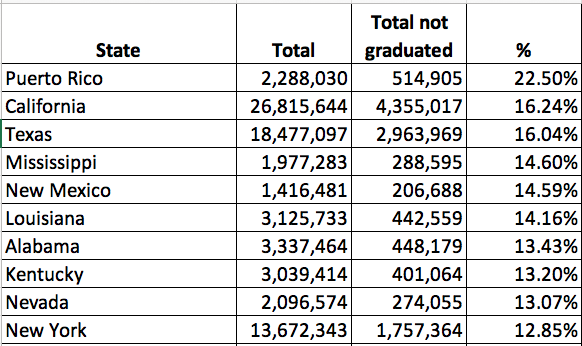 At the other end of the scale, Montana has the highest graduation rate with a mere 6.13 percent lacking a diploma. Utah, Iowa, and Minnesota are notable in this group for having populations exceeding one million. Table 2 shows the rest of the ten best. 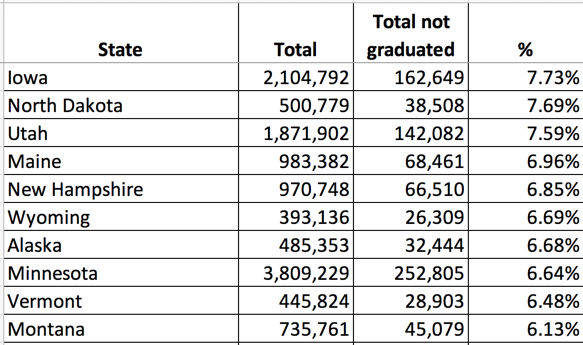 For those who are curious, click here to download the Excel workbook including the raw data and my calculations. Figure 1 shows the graph from dumbest to smartest.

The ACS surveys residents, not citizens. The survey is mailed to addresses, not individuals. Therefore, California’s results are probably made worse by the large contingent of illegal immigrants. So let’s look at a second metric.

Every few years the U.S. Department of Education’s National Assessment of Educational Progress publishes the Nation’s Report Card.[2] It includes a ranking of states by performance in subject matter areas such as mathematics, reading, writing, and science. Using standardized tests makes the data comparable both over time and among states.

Let’s start with mathematics. In 1992 California’s eighth graders ranked 29th in the country. By 2015 the state had dropped to 44th place. (I chose eighth grade because more states were reporting for that grade than 12th grade.)

Writing scores tell a similar story. In 1998 when the state was number 28. Nine years later in 2007 California ranked 36th, “only” a drop of eight places.

But it’s science where the California K-12 public school system really fails. In 1996 the state ranked 37th. That may not sound too bad until you realize only 41 states submitted results for that year. Unbelievably, things deteriorated by 2015 with California finishing 43rd out of 46 states reporting.

Only reading showed an improvement. In 1998 California was ranked 32nd out of 37 states. By 2015 the state was in 38th place. But in 2015 all 50 states and the District of Columbia reported so California moved up slightly in percentage terms.

We have long suspected that one reason California continues to elect the dumbest people to public office is because those elected reflect the overall population. This is one data point in support of our hypothesis.