The California State Legislature continues its campaign against jobs.  Effective January 1, 2020, the state will declare that freelance workers (independent contractors) in many industries will be reclassified as employees.  Affected industries include freelance writers, independent drivers (Uber and Lyft), magicians, salon workers, and a host of others. A recent opinion column in the Orange County Register contains a longer (although by no means comprehensive) list.[1]

Most people paying even half attention to the news about AB5 might assume it’s only about rideshare companies, independent truckers, and freelance journalists. In fact, hundreds of professions and industries are threatened by the sudden reclassification from independent contractors to employees — everyone from medical transcriptionists, videographers, voiceover artists and musicians, to translators, interpreters, court reporters, cartoonists, medical billers, event planners, real estate staging designers, physical therapists, notaries, indie filmmakers, YouTube creators, and more. Even magicians are subject to the law.

If you want to read the many horror stories this law has created, Karen Anderson has compiled an archive of articles. You will learn much more about Ms. Anderson as you read this article.

A Ray of Hope

Before plunging into the gruesome details, there’s a ray of hope. On December 17 the Pacific Legal Foundation filed a lawsuit to overturn AB5. American Society of Journalists and Authors v Becerra is based on unequal treatment. Details, including court filings, are available on their website. From the website,[2]

In an effort to regulate the employment status of independent contractors, California passed a law forcing companies in the state to reclassify most freelancers as employees. Under AB 5, freelance journalists and photographers must cap their submissions at 35 per year, per publisher. Anything greater, and they become employees, losing their professional freedom and autonomy. Or if journalists take a single video, they instantly lose the freedom to freelance. Other professions, like marketing and graphic design, face no such restrictions on freelancing. Such selective and unequal treatment among members of speaking professions violates the right to earn an honest living free from both irrational government interference and regulation based solely on the content of their speech.

We urge readers to support this lawsuit any way you can. Here’s one suggestion from the aforementioned Karen Anderson:

We will just add that the Pacific Legal Foundation is a 501(c)(3) organization if you’re looking for a year-end tax deduction.

For the better part of four decades I have run my own consulting business. All of my work was as an independent contractor. In part, that was because my employer, California State University, East Bay, frowned on faculty accepting regular employment anywhere else. But it also meant I could pick and choose the jobs I worked on. I recently turned down a lucrative offer because the work conditions just would not suit my current situation.

A lot of my work these days involves writing, mainly related to my fields of expertise:

AB5 says that if I “submit” more than 35 articles a year to any single publisher I must be classified as an employee. Let’s ignore the fact that there may be a huge difference between submission and actual publication. (Try getting an op-ed in the Wall Street Journal some time.) Writers who only submit 35 articles to a publisher will soon become starving writers. Or they will leave the state.

According to chatter on the internet, many are considering the exit option. The Facebook group Freelancers Against AB5 is a good place to connect with others. (The aforementioned Karen Anderson also started the group.)

Who Is Lorena Gonzalez?

Who is responsible for this fiasco? The main culprit is California Assemblywoman Lorena S. Gonzalez. Governor Gavin Newsom signed this travesty into law so he gets a good share of the blame. The reason? A payoff to unions who correctly reason that employees are easier to organize than independent contractors. (The word “independent” means what it says.) Rather than describe Ms. Gonzalez’s background, I’ll just post her Twitter bio. 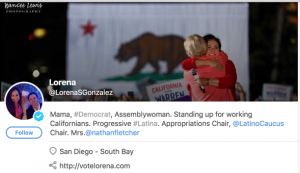 Ms. Gonzalez is a real piece of work. When asked about the jobs AB5 would destroy, she replied, “Those were never good jobs,” (See longer quotation below for context and source.)

In November, Gonzalez penned an op-ed in the Washington Post.[3] The article contains one outright lie.

In point of fact, freelancers pay taxes just like everyone else. This includes Social Security and Medicare taxes, collected when individuals file their Federal tax returns. (In the past I have paid this tax a few times when my consulting income was fairly high.)

But here’s the real kicker.

Got that? The California state government has decided to implement a number of social programs. Many of these programs cover illegal immigrants. But apparently, a freelance writer who has a bad year financially is too much of a burden on these programs. Her claim that the gig economy costs $7 billion in tax revenue is a joke. She assumes when a freelancer is turned into an employee their hourly pay would remain the same. Which is virtually impossible because an employee’s total compensation includes the many benefits paid by employers. Their hourly pay as employees will certainly be lower than their contract hourly rate.

One person asked Gonzalez to address the concerns that freelance workers have that there would be “a shortage of good jobs” in California once the law goes into effect, as employers look for workers in other states. Vox media, publisher of the sports blog network SB Nation, has announced that it would break with its California freelancers because of the law.

“These were never good jobs. No one has ever suggested that, even freelancers. We will continue to work on this next year,” Gonzalez wrote in response.

“Wow, you really suck at this,” another person wrote in response.

Gonzalez got into a testy exchange with one Twitter user, who wrote that people won’t be able to have “2-3 side hustles” anymore because of AB 5.

“They shouldn’t f——- have to. And until you or anyone else that wants to b**** about AB5 puts out cognizant policy proposals to curb this chaos, you can keep your criticism anonymous. Good God,” Gonzalez wrote, later adding that the account she was responding to belongs to somebody who works in the Legislature.

I’ll just add that for someone who purports to back workers, telling them they have bad jobs is not a good look.

One Group Got a Delay

But one group managed to get a one-year delay: newspaper delivery carriers. These are the folks who get up in the middle of the night to deliver dead tree editions of your favorite rag(s). Newspaper publishers argued making these folks employees would put more financial pressure on their industry. This is ironic because the vast majority of editorial boards in the California press tilt very far left. According to USA Today,[5]

On the final day of California’s legislative session, the state’s newspaper industry won a temporary reprieve in a fight over pay for carriers.

In the early hours of Saturday, the Assembly voted 62-4 to send AB170 to the governor’s desk. The “carveout” bill gives publishers a one-year extension to comply with a new landmark labor measure, AB5, that would reclassify many workers now considered independent contractors — including newspaper delivery people — as employees.

So the publishers got a one-year reprieve from a death penalty. This is literally hoping the tiger eats you last.

For decades California’s government has been trying to wreck the state’s economy. This is one more big hunk of concrete chained to businesses. Eventually the state will reap what it sows. Unless, of course, the voters wake up and figure out what’s going on. For that, see our previous article arguing that California may be the dumbest state.