A long post on my economics blog looked at education in the U.S. Here I want to focus on California’s performance. Short version: California’s K-12 education system ranks near the bottom of U.S. states in the NAEP. Worse, the state is spending near the national average (using both dollar spending and real spending per student). We are spending more to get worse performance.

sHere are the details of the data.  adjusted to compensate for differences in the costs of living among states). I used data from the National Assessment of Educational Progress (NAEP, often called the Nation’s Report Card).  This data is based on standardized tests administered at three grade levels throughout the U.S.  I used eighth grade because by that point students have had some actual education.  Twelfth grade would be better, but the data is incomplete, with some states not reporting at all. I used the 2019 NAEP data for mathematics and reading.  Science results were only available by state in 2015 (and a few states are missing). Spending per student by state is compiled by the Census Bureau.

After considerable search (and with the help of Maurine Haver of Haver Analytics) I discovered the Bureau of Economic Analysis publishes price deflators for consumption for each of the fifty states plus the District of Columbia. Since each state uses the same base year (2012), the 2019 and 2015 indexes are good measures of cost of living differentials.  Using those deflators I calculated real spending per student.

Some technical details: I have used data from all schools surveyed, including public and private. A quick look at math scores in public schools only did not reveal much difference. The math and reading tests have maximum scores of 500. For science, the maximum is 300. Finally, I have rounded average scores to integer values. The Excel workbook has the complete data to 12 decimal places. This means that when states are tied for a specific ranking, chances are excellent that the tie would vanish if I rounded to, say, three decimal places. That would make the graphs unwieldy.

My data and methods are transparent. Click here to download the Excel workbook including raw data, a working version of the raw data, the graphs, spending per student, the price index for each state, and six regressions to test the relationships statistically.

California is in a four-way tie for 40th place with Oklahoma, South Carolina, and Rhode Island. Those four states had average scores of 276. The national average is 282. Here’s the complete graph:

Click here to download the Excel workbook including raw data, a working version of the raw data, the graphs, spending per student, the price index for each state, and six regressions to test the relationships statistically.(click for larger image)

California is in a four-way tie for 39th place with Arizona, South Carolina, and Arkansas.  Those four states had average scores of 259. The national average is 263. Here’s the complete graph: 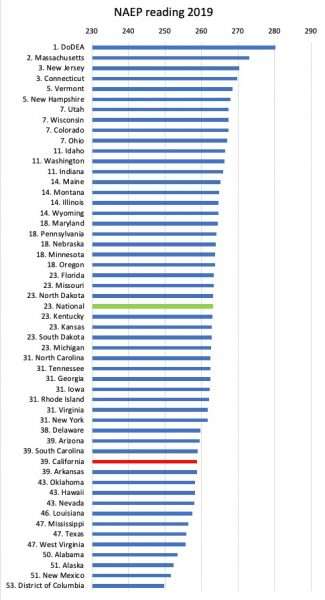 The folks at NAEP seem to be a little slow getting the 2019 results compiled. To get state level data, I had to settle for 2015 data. Unlike the math and reading scores (500 maximum), the science test has a maximum of 300 points.

California is tied with New Mexico for 45th place with an average score is 143. (Only 48 states reported.) The national average is 154. Here’s the complete graph. 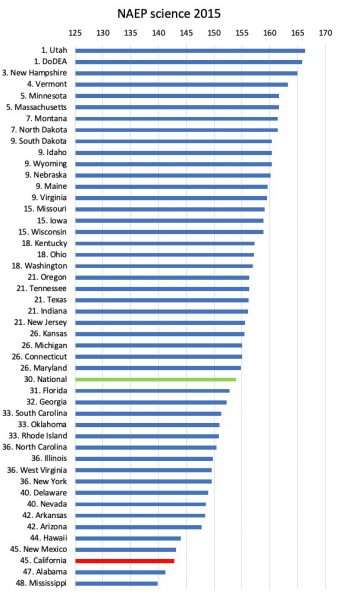 As noted earlier, the Census Bureau compiles this data.  Here are the results: 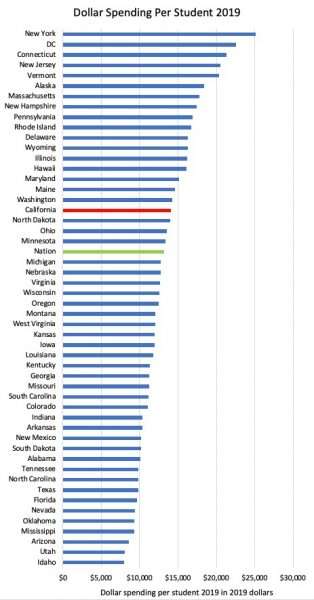 California spends slightly more than the national average.  But California is notorious for our high cost of living.  After adjusting for the cost of living differences among the states, here’s how things look: 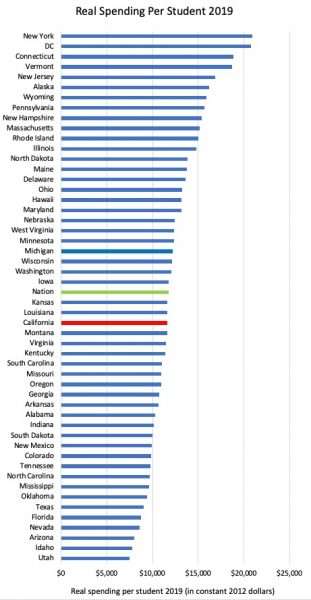 California ranks 40th in math, 39th in reading, and 45th in science.  If the state wasn’t spending very much on education, those numbers might be acceptable.  But the state also ranks 18th in dollar spending per student and 29th in real spending.  Taxpayers are paying a high price for very bad performance.  This helps explain the large number of misinformed voters here.