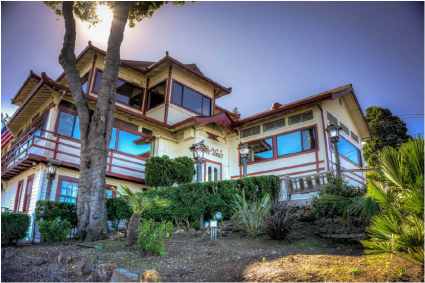 The Van’s is closing for good. The Six-Fifty broke this bad news today. Owner Loring De Martini had been thinking about retiring.  COVID-19 sealed the deal for him. I have to add that De Martini is a legendary surname in the Bay Area for a variety of reasons. De Martini Orchard is an open-air shop with the best fruit, vegetables, and sundry other items on the peninsula.  I have no idea how (or if) they are related to Loring De Martini. 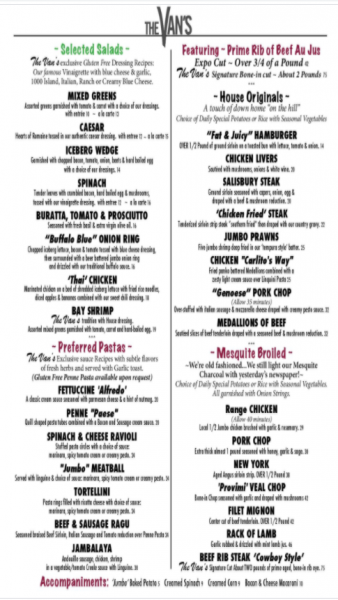 Located on a hillside above El Camino Real in Belmont, The Van’s has long been an institution.  Long before Bradley Ogden reinvented American comfort food, this place was dishing out prime rib, veal chops and a host of other dishes.  The menu is to the left. (Grabbed from their website May 27, 2020).

In the distant past I lived in the northern part of San Carlos. The Van’s was maybe 1.5 miles north.  Among other memorable meals was Sunday brunch with my late wife and her cousin (with a date) and dinner with my mom and dad when they visited from North Carolina.

I’ve included the entire article from The Six-Fifty below as a pdf file.  The history they give is accurate but incomplete. The Van’s got its start as a Japanese teahouse in the 1915 Panama-Pacific International Exposition in San Francisco. E.D. Swift brought the building down the bay on a barge and hauled it across the peninsula and up the hill in Belmont.  His two daughters used it as a private residence.  During prohibition the first floor was a speakeasy.  The Six-Fifty gets the history right to this point.

What they miss is that the second floor was a bordello.  This is well-known locally, although this fact may not have made it into print. After prohibition, the place was a saloon, later converted to a restaurant called Gevan’s. That morphed into the current name.

Most recently The Van’s was a 6,000 square foot restaurant that hosted large crowds every night.  After Mr. De Martini bought the property in 1973, he proceeded to expand the seating (including opening the second floor) and updated the kitchen, electrical system, and plumbing.

Curions about where Belmont and San Carlos are located?  This will help.

Read the entire article.  It’s a true appreciation of a Bay Area treasure.  Sadly, it will only be remembered in pictures henceforth.

thesixfifty.com-A tea house a speakeasy a beloved restaurant The Vans in Belmont has closed for good