The current count is 82. That’s the number of lawsuits the state of California and our attorney general Xavier Becerra have filed against the Trump administration.  The Sacramento Bee has the full story.

In a minute I’ll look at the issues in the latest lawsuit.  But first, let’s think about how much this costs California taxpayers.  At $100,000 each (way too low) the cost is $8.2 million.  A more likely figure is ten times that, $82 million.  Still think your taxes are too low?

Like most of the other 81, the most recent suit involves environmental regulations.  In this case, the National Highway Traffic Safety Administration (NHTSA) revoked the Obama corporate average fuel economy (CAFE) standards.  This particular regulation set fuel economy standards (miles per gallon) for automakers based on the average of their entire sales during a year.

This description is a vast oversimplification.  Here’s the table summarizing the Obama-era standards (from Wikipedia).

Note this highlighted rows.  2020 is now.  My guesstimate of the average for cars is about 44 mpg.  There is no way that standard is being met.  It’s significant that Ford has announced they will no longer make passenger cars for the U.S. market.

For better or worse, the most recent data is from 2017.  Courtesy of the U.S. Department of Transportation, 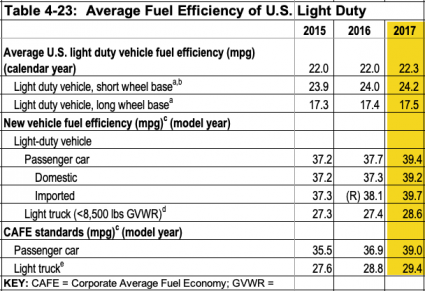 A cursory glance says the automakers just about met their targets.  Sadly, the goalposts kept moving, likely faster than technology can evolve.