Various government officials have proposed guidelines for re-opening the U.S. economy. Earlier I wrote about what testing will and will not do when making this decision. It’s pretty obvious that governors will be the main decision-makers. President Trump has proposed a three phase process for reviving the economy.[1] California Governor Gavin Newsom has issued guidelines while making confusing and contradictory statements about who will make the ultimate decision.[2]

I’ll first review the statements issued by Pres. Trump and Gov. Newsom. Then I’ll describe an optimal political strategy for governors in general. California’s diversity reinforces this strategy. This is about reviving the California Economy.

“We are not opening all at once, but one careful step at a time,” Trump said, adding that the guidelines were “based on hard verifiable data.”

He added: “Some states will be able to open up sooner than others.”

“Phase One” is for areas of the country who solely satisfy the criteria laid out by the White House and calls for social distancing to remain in place, avoiding gathering of more than 10 people, and avoiding any unnecessary travel.

“Phase Two,” which is for regions that have met the criteria twice and have not seen “a rebound” in infections, still calls for residents to practice social distancing and try to avoid large gathering but opens up the possibility of resuming non-essential travel.

The third phase, which is for areas who have met the criteria three times and have no rebounds of the virus, is the most open and allows vulnerable parts of the population to go back in public, opening back up gyms and bars, resuming full-time staffing at worksites and letting people head back to large venues like restaurants, movie theaters, churches and sports venues – albeit at a reduced capacity.

“This is a gradual process,” Trump said. “Throughout the process, citizens will still be called on to use all the weapons in this war.”

The President has often struggled with the concept of Federalism. That ambivalence is reflected in his comments above. But at least these are only guidelines. And, as we’ll see, he is not alone in his ambivalence.

Local officials will have a “profound and outsize influence” on any decision to lift public health orders, Newsom said. He went on to outline six key indicators that will guide the state’s decision as it considers lifting the stay-at-home order:“The ability to monitor and protect our communities through testing, contact tracing, isolating, and supporting those who are positive or exposed;

Local officials will have a profound and outsided influence on Gov. Newsom’s decision. Anyone who believes that has not spent much time watching our governor. He is as dictatorial as Gray Davis with about the same degree of intelligence. But the last paragraph gives the game away. He will make the decision for the entire state.

Like most states, California is geographically and demographically diverse. Population density by county ranges from 18,836 per square kilometer (San Francisco) to 1.5 in Alpine county. Here are the five most densely populated counties in the state:[3] 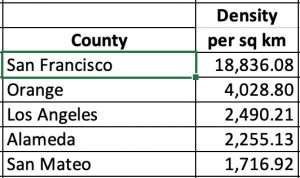 And the five least dense: 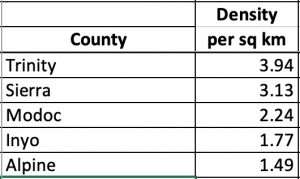 Social distancing will probably not be much of a problem in Alpine County.

The point is that counties are a far better measure of the cost of social distancing than an entire state. There may be exceptions, perhaps Vermont and Wyoming. In San Francisco staying six feet away from others is likely to be difficult. For those who are curious, here’s a heat map of population density for the entire state. The source is in footnote 3 below. 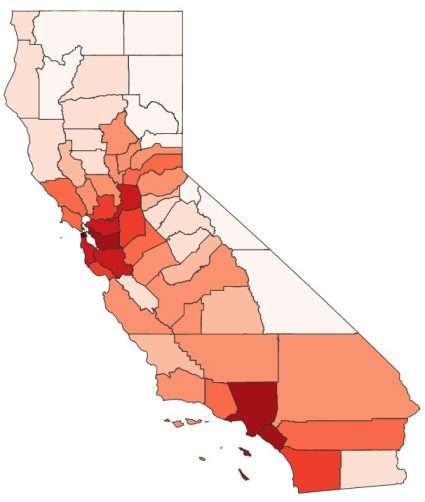 What does this imply about a pretty good strategy for reopening California’s economy? The answer is fairly clear: reopening the entire state on a single date is likely to fail spectacularly. Allowing mayors and county commissions to make the decision will produce a better response. And this strategy has the added advantage of featuring one of the politician’s best tools: blame-shifting. Governor Newsom can point to local officials when (inevitably) something goes wrong.

Added note. Using counties is a compromise. The astute reader will have noticed two counties absent from the five most dense counties. Those are Sacramento and San Diego. While the cities are undoubtedly pretty dense, the counties encompass many sparsely populated areas. If Governor Newsom is very smart he will make exceptions for counties that have a single very large city. Offhand, Sacramento and San Diego are the only ones that come to mind.

Because I have too much time on my hands, here’s a graph showing the counties in order of density. Make of it what you will.