Not one, but two new bills in the legislative hopper will each put downward pressure on housing prices, increasing the depth of the tarnish layer on the once-Golden State. AB1905, introduced by Assemblyman David Chiu (D-SF, where else) would limit the mortgage interest deduction for California income taxes. The increased tax revenue would go toward homeless programs. A related measure, AB1907, introduced by Miguel Santiago (D-LA, OK, there, too) would eliminate environmental review for homeless shelters. That would leave local zoning ordinances as the sole protection for homeowners. But don’t worry – SB50 by Senator Scott Weiner (D-SF) will eliminate a lot of that local zoning control.

Both of these measures will reduce the value and probably the market price of housing, especially in coastal regions. Let’s take a quick look at each.

AB1905 would put two important restrictions on the mortgage interest deduction.[1] For a primary residence, only the interest on the first $750,000 will be deductible. If you’re lucky enough to own a second home none of the mortgage interest would be deductible.[2] Mr. Chiu’s office estimates this law would bring in between $400 and $500 million in additional tax revenue. This revenue would be used for homeless services, including shelters, “permanent supportive housing,” and other homelessness services.

Later I’ll show why AB1905 is likely to generate much less revenue than projected. For now, note that 175,000 taxpayers would be affected. Each would owe about another $1,000 in state taxes according to Franchise Tax Board estimates. Here’s what Mr. Chiu has to say about these taxpayers.

These are the individuals who own the most expensive homes in California. It’s a small price to pay among a small number of wealthier homeowners to establish a permanent fund for homelessness prevention.

Mr. Chiu has a strange definition of “wealthy.” While houses can be bought for $750,000 in the Bay Area or greater Los Angeles, there are not very many. Dwellings in that price range will be in less desirable neighborhoods, be smaller, and may lack some amenities we take for granted. This bill specifically targets “coastal California,” the term usually used to describe this market. In reality, the California coast is long and winding. There is some justice in that the targeted regions vote overwhelmingly Democrat.

AB5 is already causing some independent contractors to leave the state. I’ve written about this here and here. The very wealthy are far more mobile than people who make a living writing for various publications. One impact will be fewer than 175,000 taxpayers with high mortgage interest deductions.

Ironically, the very wealthy are unlikely to change their behavior much – at least those who choose to continue to live here. Households with annual income in seven figures probably can afford the increased taxes. Those who will suffer will be newcomers to the housing market and those with incomes between $100,000 and $1,000,000.

Lowering the mortgage interest deduction will reduce the value of housing by increasing the cost. Part of the mortgage interest must now be paid out of after-tax income rather than before-tax income. Any way you slice it this is a cost increase. Technically this will cause a decrease in supply. That would normally cause price to rise. But in this case demand is likely to fall, more than offsetting the supply shift. 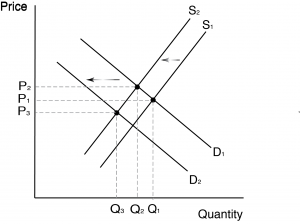 California makes very detailed tax data available. I looked at the mortgage interest deduction for 2017, focusing on households with income of $5 million per year or more. There were 4,319 of these fortunate households. They deducted $112.9 million in mortgage interest. That may sound like a lot, but it’s only $26,142 per household. That translates to a monthly interest payment of $2,178. Making a few assumptions (APR on the mortgage is 4.00%, 30 year (180 month) mortgage, calculated monthly interest payment of $2,178 occurs in month 90), the original mortgage was $1,127,285.66. Assuming a 20 percent down payment the price of the house was $1,409,057.

Welcome to the world of Coastal California real estate. That amount will buy you a modest home at best. Which would be strange for folks making upwards of $5 mil. My best guess is that these mortgages are used as one element of tax reduction strategy. Limit the mortgage amount to $750,000? No problem. These folks will simply pay off the difference between the current balance and $750,000. Meaning the projected tax revenues will be much too high as the wealthy act to reduce their taxes.

But the Homeless Will Be Moving In Next Door

AB1907 would exempt “certain emergency shelters, supportive housing and affordable housing until Jan. 1, 2029.”[3] To understand the importance of this exemption, you need to learn a bit about California environmental law.

The California Environmental Quality Act (CEQA) is the governing authority over California environmental laws and regulations. It is well-known for both delaying construction and raising the cost. Here’s the short version from Wikipedia:[4]

CEQA has been criticized for being “abused” (used for reasons other than environmental ones) to block, downsize, delay, or gain other concessions from new development. Residents use CEQA to try to block homeless shelters and affordable housing projects from being located in their neighborhoods; one study found that 85% of CEQA lawsuits were filed by organizations with no record of environmental advocacy and 80% of CEQA lawsuits targeted infill development; CEQA requirements have dramatically increased the difficulty of creating bicycle lanes on already existing roads; and unions have used CEQA lawsuits or threats thereof to force developers to use union workers.

To get the flavor of CEQA, take a look at the Wikipedia article. It goes into great detail about each aspect and topic in the law. Near the end there is a long section of criticisms. Here’s one example.

Carol Galante, a professor of Affordable Housing and Urban Policy at the Terner Center for Housing Innovation at UC Berkeley, who served in the Obama Administration as the Assistant Secretary at the U.S. Department of Housing and Urban Development (HUD), stated that “It (CEQA) has been abused in this state for 30 years by people who use it when it has nothing to do with an environmental reason, … NIMBY-ism is connected to the fact that for everyone who owns their little piece of the dream, there’s no reason to want development next door to them, CEQA gives them a tool to effectuate their interest … We need to fundamentally rethink how the CEQA process works in this state.”

CEQA has been used by residents in San Francisco and Los Angeles to attempt to block homeless shelters and affordable housing projects from being located in their neighborhoods.

Remember, cities and counties have the power of eminent domain.[5] That means, in theory, your city could condemn the house next to yours, tear it down, and immediately begin construction of a homeless shelter. If you think this is impossible, take a look at Sen. Scott Weiner’s SB50 to get some idea of what Sacramento has in mind for you.

This will put downward pressure on housing prices because, frankly, there’s a good reason people are using CEQA to oppose homeless shelters in their neighborhoods. Individuals housed there are often homeless for a reason. Screening is likely to focus on preventing drug and alcohol use with little attention paid to mental illness.

Why is Homelessness Growing?

Will these measures solve the homelessness problem? To answer this question we have actual data. Here’s a headline from the Wall Street Journal:[6]

The number of homeless grew by 16% in the city of Los Angeles between January 2018 and January 2019. During that same period, LA spent $402 million on homelessness. With a homeless population of 36,300. That’s $11,074 per person. Yet the population continues to increase. Why?

It is a truism of economics that when you increase spending on an activity you encourage more of that activity. San Francisco, Los Angeles and other California cities have been spending more and more on homelessness. They are getting more homeless. This result should have been obvious.

California has taken many nips out of the goose that laid the golden egg. Beheading said goose is not necessary. Death by a thousand cuts seems to be the objective.