In their October 9 issue, the New York Times devoted 2,765 words to describing the history of California’s infamous high-speed rail project. https://www.nytimes.com/2022/10/09/us/california-high-speed-rail-politics.html The article is brutally honest, going so far as to predict that the project is unlikely to be finished before the end of this century. You read that correctly. Here’s the exact quote:

The rail authority said it has accelerated the pace of construction on the starter system, but at the current spending rate of $1.8 million a day, according to projections widely used by engineers and project managers, the train could not be completed in this century.

Yeah, that’s the ticket. Let’s speed up the spending! That will do it. High-speed rail, where art thou?

No it won’t. There are two analogies. First, nine pregnant women cannot have a baby in one month. The costs of the rail system will increase exponentially while progress will increase linearly. In other words, you can build it faster, but the cost per mile will go up. Way up.

Then there is the well-known problem of diseconomies in communication systems. Among software project managers, it is generally accepted that adding more engineers to a project that is already late will make it later. Every additional engineer has to communicate with each of the others, slowing the transmission of information. I don’t care how you set up your e-mail, Slack, or other communication media.

High-speed rail is the asbestos litigation of California politics.

I have some personal experience with this. In the distant past I did some work in the desktop database market, specifically dBASE and Paradox. I was involved enough to have inside information. I actually was a consultant on dBASE for about ten years. I was the de facto IT manager at Ansa Software, the publisher of Paradox. dBASE IV was written by about 750 engineers. Paradox had, at most, a dozen engineers working on the code. I will concede that dBASE was a far more ambitious product than Paradox. But did they really need 75 times as many programmers??

Stonehenge in the Central Valley

Here’s what the project looks like today. This is often called Stonehenge in the Central Valley. You can find it just outside Madera. Photo from Twitter via @SaulGonzalezCA. 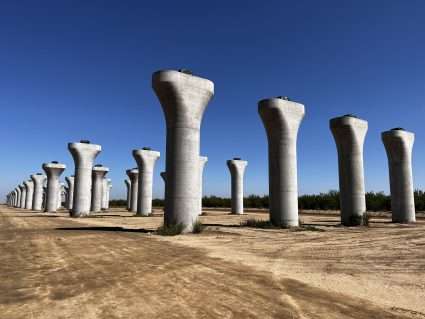 Stonehenge in the Central Valley

Mr. Gonzalez also included this interesting tweet from the March 22, 2022 Fresno County Board of Supervisors. (Available as part of Mr. Gonzalez’s live thread of the meeting. The comment is near the end of the thread. https://twitter.com/AndyHS/status/1506351934105522178)

The internet exploded with comments. Schwagel comment at March 22 2022 Fresno County Board of SupervisorsAmong the best was Jim Geraghty’s rant on National Review’s “The Editors” podcast.

Jim Geraghty Weighs In With A Bit of History

I’ve made Jim’s thoughts a bit more readable with what I hope is very light editing. Rather than read this, I recommend listening to the audio clip below.

Rich, my favorite aspect of the entire debacle of high speed rail in California. Let’s go to the Wayback Machine, let’s time travel all the way back to the distant past of 2015. And the HBO television series “True Detective,” which had an awesome first season. And then the second season, which was set in Southern California, was not nearly as good. But one of the highlights was Vince Vaughn playing this shady mob connected businessman. And he was running a giant scam involving California’s high speed rail project. I wrote about this in the Morning Jolt way back then. And the gist was, it was involving purchasing land and then selling it back to the state. And because they’d gotten federal matching funds, and they’d fast-passed a proposition, basically, all of these mobsters and all these sleazy businessmen looked at the state as a giant pile of money that was just waiting to be taken.

And I remember a few people, you know, on the left side of the spectrum, saying, “Hey, wait a minute, this, this doesn’t make the state project look good. Don’t they know that? Wait, no high speed rail is the wave of the future. You just wait seven years from now and 2022 people will be enjoying high speed rail?”

And of course, as the New York Times article points out, I love the projection, it may not be done this century. We’re 22 years in! This has been going on for three decades! And it’s still not there. I’m glad the New York Times wrote this article, what I would love is just take that next step. They’re almost at the precipice of the realization, we keep seeing all these “Oh, California’s where the future is. And California’s where big things happen.”

No, it isn’t. California is where big dreams go to die. The only businesses that are not leaving California are the ones that cannot leave because of geography. You can’t move to Central Valley farms. They’re just not gonna be able to find that climate anywhere else. You can’t just pick up a farm and move it. But TV production, movie production, a lot of that’s going up to Vancouver. Tech stuff? A lot of that has gone to Austin and the rest of the Sunbelt. A whole bunch of other businesses are, “You know what, get me out of here can’t deal with it anymore.”

And here is something that California progressives love. And they can’t make it happen because they have these crazy ideas. “Oh, let’s let’s run it through Bakersfield.” Or, you know, they forgot the whole point of high speed rail was to get you from one place to another really fast in a straight line. Running it through all these other communities doesn’t make any sense because it’s got to stop and let people on and off. You were used to reality smacking liberals or progressives in the face. This time it used a brick.

In case you missed it in the quotation from the New York Times above, current spending on high-speed rail is $1.8 million per day. Give them the benefit of the doubt, assume 8 hour workdays 5 days a week. With 365.25 days in an average year, there are 52.1786 weeks per year. That’s 260.89 workdays per year, Works out to $469.61 million per year. There are 78 years until the turn of the century. Total cost: $36.6 billion. I won’t be around to see the year 2100, but you can write down this prediction: high-speed rail will not be completed by then. Hopefully, that’s because some politician had the guts to shut the project down. If not, I’ll still stand by that prediction. High-speed rail is the asbestos litigation of government projects.