The BART board of directors remains a cesspool.  Today brings further evidence. The BART Board of Directors, acting on the advice of outside counsel, decided not to remove Lateefah Simon from the board.  Read on for details.

The BART board has nine members, each representing one of the nine BART districts. One requirement is that each director must live in the district he/she represents.  Ms. Lateefah Simon represents District 7. She lived in Richmond until May, 2021. After receiving threats and finding some evidence of trespassing on her property, she sold that home and moved into the MacArthur BART Transit Village Project.  Here’s a map showing the location of the project. 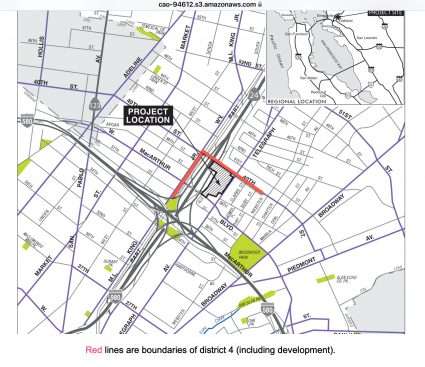 Here’s the problem. That development is not in District 7. EastCountyToday.net says she lives on Turquoise Way, clearly part of the development. And also part of District 4. The red line in the map above shows part of the boundary between the two districts.  (A live map is embedded below.) 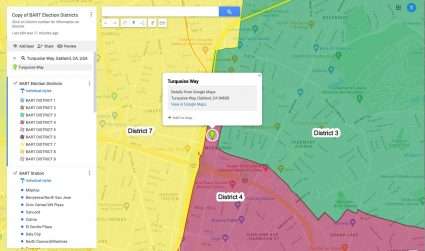 What to do? On March 10, 2022 BART announced that Ms. Simon would be stripped of her board seat. Ms. Simon claimed BART staff assured her that her new address was within the district.  Given that I figured this out in a couple of hours, that is very hard to believe.  But, of course, the San Jose Mercury-News editorialized this (albeit in the news article linked near the beginning of this paragraph).

The decision removes the transit operator’s only Black board member and leaves vacant her District 7 seat, which represents parts of Richmond, Berkeley, Oakland, and San Francisco.

Alicia Trost, a BART spokesperson, said the May memo does not discuss Simon’s address and the agency only recently learned of the district discrepancy. An address location tool on BART’s website laces Simon’s apartment complex in a sliver of District 4 bordering District 7.

“Her address is not in District 7 and so when we found out the law is very clear that you are no longer a board member,” said Trost, adding that there is “no evidence” that a BART employee advised Simon that her address was within District 7 boundaries.

It took BART two weeks to back down.  In the face of large-scale protests, BART concluded,

In a joint statement on Wednesday, Powers and Rebecca Saltzman, the board president, said BART’s staff did not have the legal authority to force Simon out of her seat. Instead, that authority resides with the BART board or through a court order, according to a review of the matter from Olson Remcho, a firm specializing in elections law, which BART is now relying on for the case.

“At first our inside counsel told us it was very clear that the seat was vacated because she had moved out of the district and nobody disputed that part,” Saltzman said in a phone call. “But outside counsel has made it clear that there needs to be some actual action by somebody, whether it’s the board or the court to vacate that seat.”

Ms. Simon gloated a bit in her reply.

“Thank you to my fellow directors for following my legal team’s demands, seeking independent counsel and correcting this error so the voters of District 7 are not disenfranchised,” Simon said. ” I will continue to do what I have always done — fight for transit justice, accessibility and equity for the people.”

Attached is a long pdf thread starting with a tweet from Janice Li, Vice-President of the BART board.