The state of California reservoirs is not good, but not nearly as bad as the San Jose Mercury-News would have you believe.  Here’s the screaming headline from the November 9, 2021 edition:

It is no coincidence that San Jose is in Santa Clara county where reservoirs are filled to 11% of capacity.  Serious problem? Yes, but it’s self-inflicted.  Here’s how the rest of the Bay Area water system (and statewide reservoirs) are doing. (My data is fully transparent.  Click here to download my Excel workbook.) 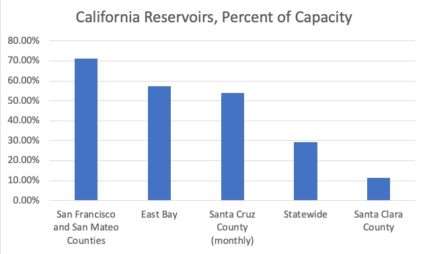 How is this possible?  San Francisco and San Mateo counties together have 71% of capacity filled.  The East Bay (Berkeley, Oakland, Hayward, Richmond, et.al.) is at 58%. Santa Cruz county is at 54% and the statewide reservoirs are 29%.  What in the world happened in Santa Clara county?

Government incompetence.  Actually, government and Valley Water, the agency that administers water in the county. Here’s what the agency says about Anderson Reservoir:

You read that correctly.  The project was approved in 2012.  The agency went ahead with draining the reservoir in 2020 despite having below-average rainfall the previous season and a possible additional year of severe drought (which actually happened).  Why not delay the earthquake safety upgrade until after a year of normal rainfall?

For those unfamiliar with California rain, the season starts on July 1 and ends the following June 30.  The state gets most of its rain and show between November and March.  Reservoirs and mammoth water transfer infrastructure store and distribute the water to get through the dry months. Here’s the history of annual rainfall in Los Angeles.  You can easily see the below-normal rainfall for the last few years.

Suppose the Anderson Reservoir was half full.  Here’s what the graph would look like: 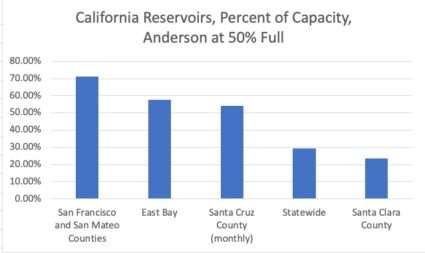