BLM on the Golden Gate Bridge for Labor Day. About 100 to 150 protestors invaded the right traffic lane in each direction on the Golden Gate Bridge. Traffic apparently was snarled with 30 minute delays reported. The California Highway Patrol closed the bridge for two hours according to the San Francisco Chronicle, with officers removing the protestors as fast as possible.

The Chronicle report included this little bit of gaslighting:

The media really does think we’re stupid. “Applied for a permit” does not mean they actually had a permit.

As the third day of a three-day weekend, many were returning home. For those who are not familiar with the Bay Area, peninsula residents tend to head to Sonoma and Napa for the weekend. Their country counterparts head south for a little urban exposure.  And tourists are always a traffic factor.

Particularly galling was the Twitter response of one Brian King. As reported in the Bay Area Patch, 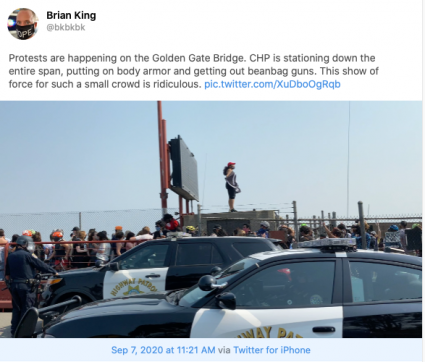 We’re happy that Mr. King places such a low value on other peoples’ time.  But we’ll bet that if he was 30 minutes late for a dinner with his family, he wouldn’t be quite so supportive of BLM.