The state of California is about to do the wrong thing at the wrong time. The state is scheduled to raise the excise tax on gasoline by 3.2 cents per gallon on July 1.  This would keep California in first place with the highest gas taxes in the country, 50.5 cents a gallon.  Reason.com picked this up and wrote about it.

Do Not Raise Taxes During a Recession

Economists, regardless of their political leanings, generally agree on a few things.  Free international trade benefits both countries and lowers prices paid by consumers.  Raising the minimum wage will cause reduced employment, hitting poor and disadvantaged groups hardest.  And raising taxes during a recession is a terrible, bad, dreadful idea.

Yet that’s what the state is about to do.  In 2017 SB1 was passed by the legislature and signed by the governor.  This bill raised gas taxes with the promise that the revenue would be devoted solely to roads, bridges, tunnels, and other automotive passageways.  One little-known feature is indexing the tax rate to inflation. Per the Reason.com article,

The 2017 law specifies that the tax’s first inflation adjustment be based on the changes in the California CPI from November 2017 to November 2019. Because prices went up about 6 percent over that time, the gas tax is set to increase by the same amount.

A Dive Into CPI and Population Data

If only it was this simple.  The U.S. Bureau of Labor Statistics does not report CPI’s for individual states.  The CPI for California is published by the state’s Department of Finance.  Which sure sounds like a conflict of interest to me.  The state both determines the inflation rate and collects tax revenue based on that rate.

But that’s neither here nor there. What’s really interesting is the way California calculates its CPI.  This table gives some clues:

A cursory glance at this table suggests that the California “CPI” is just the weighted average of the CPI’s for the four Metropolitan Statistical Areas included in the Bureau of Labor Statistics CPI’s for MSA’s.  Sure enough, the Department of Finance confirms this:

The U.S. Bureau of Labor Statistics (BLS) compiles and publishes the CPI for the Los Angeles area monthly, the Riverside area bimonthly, San Diego county bimonthly, the San Francisco area bimonthly, and the nation each month.  A California CPI is calculated by the California Department of Finance as a population-weighted average of the BLS-published local area CPIs.

Frankly, this is outrageous.  And it’s not even clear that the procedure is being followed. First, the DOF is calculating the annual compounded percentage change then multiplying by 2 (since this adjustment covers two years).

Second, the CPI is measured in November.  The last data was November, 2019.  Since then, there has been no inflation and periods of deflation.  The state gets their revenue and we’re left holding the bag. 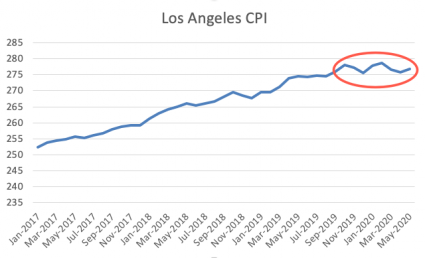 I spent some time with MSA population data and could not come up with the percentages for 2018.  The weights used in that year were 35% for the San Francisco area and 65% for Los Angeles.  I’ll just add that when I see numbers that round, I am automatically suspicious of the methodology.  It looks to me like the Department of Finance is just making numbers up.

This is patently ridiculous.  At minimum the tax increase should be suspended for a year.  And perhaps the California Department of Finance needs some training on how the CPI is measured.  They could start with chapter 17 in the BLS Handbook of Methods.