There is a scam run by the San Jose Mercury-News.  The source of the scam is their home delivery subscription model with a few special tweaks.  This will be a fun ride.

We have been long-time subscribers to the Merc.  But when they raised their home delivery rates to $600 a year, we decided to switch to electronic only ($16 per month, $192 per year).  This is on top of the change they made about a year ago.  Subscriptions are now billed for one year, full price up front, no refunds if you cancel before the year has expired.

So I marked my calendar for November 12 to cancel the subscription.  That should have given me a week.  Imagine my surprise when I received an e-mail from subscriptions that our subscription would have been automatically renewed October 29.  Luckily, the credit card they had on file had expired.  So we were asked to update it.

What followed was a long series of phone calls to subscriptions.  We were first informed that the subscription date had been advanced from November 19 to October 29 because we had been billed for six special editions during the year.  Rather than charging us for those mailings, they simply shortened the duration of our subscription.

But there was a problem.  The only way to cancel those six special mailings was to call.  I have distinct memories of spending quite a bit of time on the phone cancelling the specials.  I informed the agent of that fact.  After a few heated exchanges (including one disconnection that seemed to be deliberate), I got the subscription canceled.

But the story continues.  The other day I received this in the mail. (Personal information has been removed). 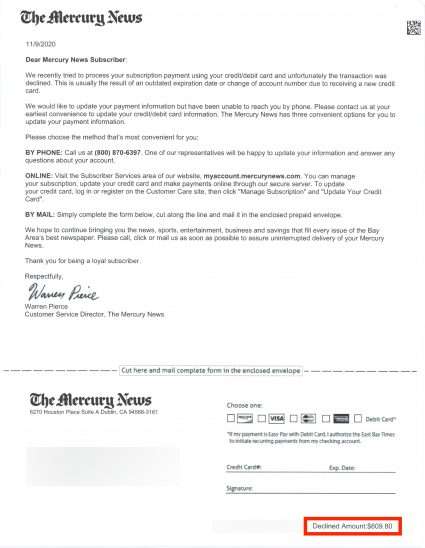 This is an interesting letter for a number of reasons.  There is no mention of the nature of the subscription.  Was this our new subscription or the old one (now canceled)? The only way to tell is by spotting the little note in the red box: “Declined Amount $609.80.”

But nowhere in the main body of the letter about the duration of the subscription, the price, or anything else.

i headed for the Customer Service area of the Merc website.  I immediately noticed we had two subscriptions listed. One was the now-canceled subscription. The other was our new digital-only subscription.

I took a look at the canceled subscription.  Again, I’ve blurred the subscriber information formerly in the red box and two other places. No mention of the price, what I would be signing up for, no nothing. 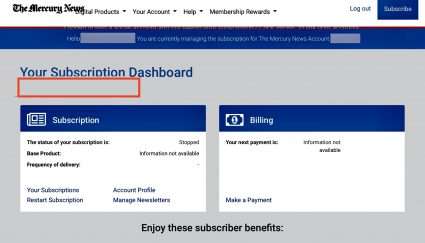 It sure looks like the Merc is trying to prey on us old folks.  I wonder how often they succeed?