Governor Gavin Newsom is part-owner of the Plumpjack Group, a stable of three different wineries.  Until a few days ago, wineries were planning on reopening tasting rooms in time for the holiday weekend.  Then Newsom issued a new shutdown order covering 19 counties that had not met his standards for reopening.  One county that was allowed to remain open was Napa, where the Plumpjack, Cade, and Odette tasting rooms are located.  In fact, until very recently, the governor had every intention of keeping Plumpjack open. Then he briefly announced Plumpjack would close but the other two would remain open.  Now it develops that Plumpjack will also be open but with special rules: 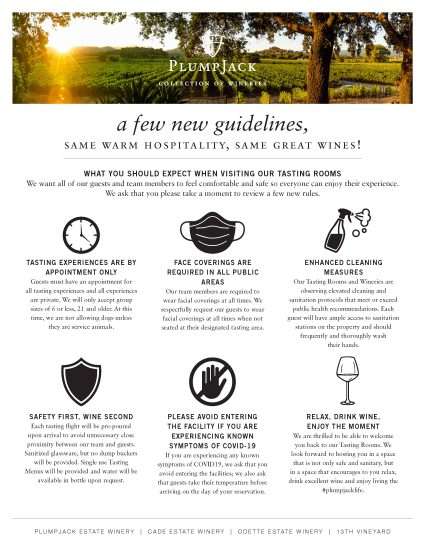 No matter how you slice it this is sheer hypocrisy from Governor Newsom.  To see why, consider the list of counties that must close and those who will remain open.

What’s interesting is the counties not included on the list, Missing are Sonoma, Mendocino, Napa, and San Luis Obispo (Paso Robles).  Mendocino is home to the Anderson Valley and its excellent pinot noirs. Sonoma and Napa are, of course, well-known.  Why were these counties allowed to remain open?  Was it science and regulations? Or was it simply cover for Newsom to keep his wineries open?

It’s worth mentioning that Newsom’s partner in starting Plumpjack was Gordon Getty, heir to the eponymous fortune.  Mr. Getty once wrote an opera titled “Plumpjack.”  He is also well-known for  maintaining two separate families.  One was in San Francisco, the other conveniently distant but accessible in Los Angeles.  There is little doubt that Newsom would like to stay on Mr. Getty’s good side.

I am indebted to Jen Van Laar at Redstate.com who took time from the holiday weekend to write three separate articles:

“CA Dictator Newsom Orders Shutdowns in 19 Counties While BLM Protesters Continue to Swarm in LA“. (July 2).
“CA Gov Newsom Shuts Down Majority of State’s Wineries for 4th of July – But Not His Own.” (July 2).
“BREAKING: Gavin Newsom’s PlumpJack Winery Is Shutting Down This Weekend Due to ‘Logistical’ Issues’ ”. (July 3).